This post was written by Alan Vuong. You can read his original article here.

I have attended many music festivals around the world with îleSoniq being my most recent in Montreal.  I have never camped at all in my lifetime and was always curious about camping at a music festival.  I heard from other friends how much more immersive the experience can be since you sleep right on site with many other festival goers.  I was in contact with Chad from Imagine Music Festival and was talking to him about how someone like me who is a quadriplegic would do the camping music festival.  I was so excited to hear how ADA (Americans with Disabilities Act) accessible the venue and the camping would be that I quickly booked a trip to Atlanta with a buddy and wanted to blog and share my experience with everyone. 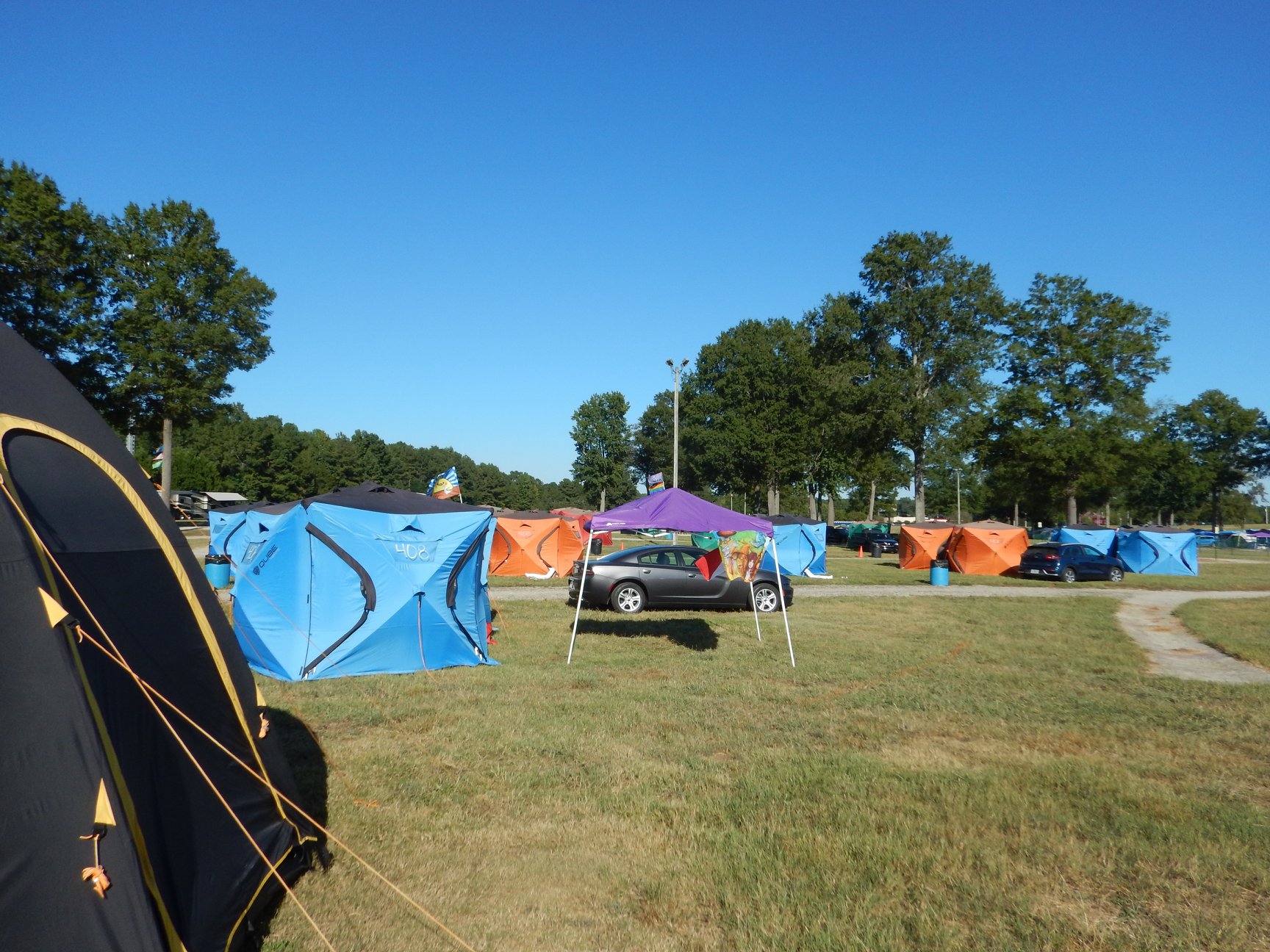 The Imagine Music Festival will take me back to Atlanta for 3 days of today’s best DJ’s during the 3rd weekend of September at Atlanta Motor Speedway.  This festival started in 2014 and began as a 2 day festival held at Historic Fourth Ward Park & Masquerade Music Park during the last weekend of August.  For 2015, it was already rated as one the top music festivals to attend by Fest300 and continued with the 2 day format.  For 2016, the festival expanded to 3 days staying at the last weekend of August and moved to Atlanta Motor Speedway and added camping options.  Starting 2017, the event moved to the 3rd weekend of September keeping the 3 day theme and camping.  For 2019, they also had an addition of early Thursday evening entry but we decided arriving Friday early afternoon would be fine.

I was also in contact with Erika from Unity Travel which is a company that deals with all music festival related services like camping, hotels, shuttles and more.  Since I was coming in from Canada, and couldn’t bring a tent and all camping supplies, it was best to do Qube camping with Unity Travel at Imagine Music Festival.  This means that the tent would come furnished with 2 air mattresses, pillows, linen and be fully set up.  Since the Qube tents were smaller and only had a slit opening, Erika made sure there was a special tent brought in that was large enough and had a door that my wheelchair could roll in easily.  Talk about great service! 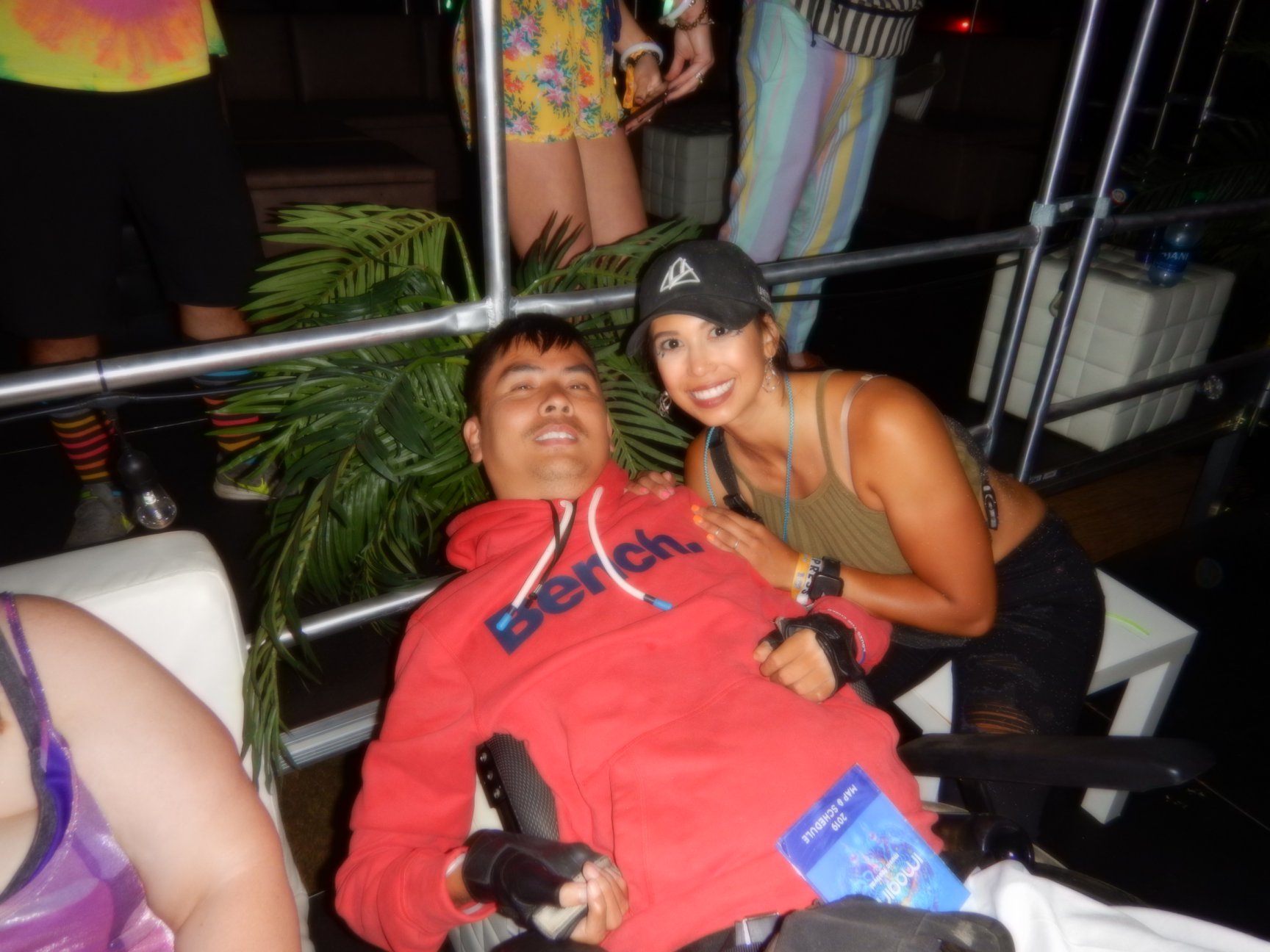 thanks Erika from Unity.travel for bringing in a tent that was wheelchair accessible

I am only focusing on the camping part of Imagine Music Festival on this blog and will write a separate blog about the festival and the accessibility of Atlanta Motor Speedway.

I was so happy that we didn’t have to bring a tent, air mattress, pillows or sheets.  Having this already taken care of by Unity Travel, we just brought our basic luggage of clothes with extra layers because I heard sleeping at night in a tent can get very cold.  Other must items include a lantern/light, power bank to charge small electronics, food, drinks, water bottle, prescription medications, sun screen, shampoo, soap, and towels. 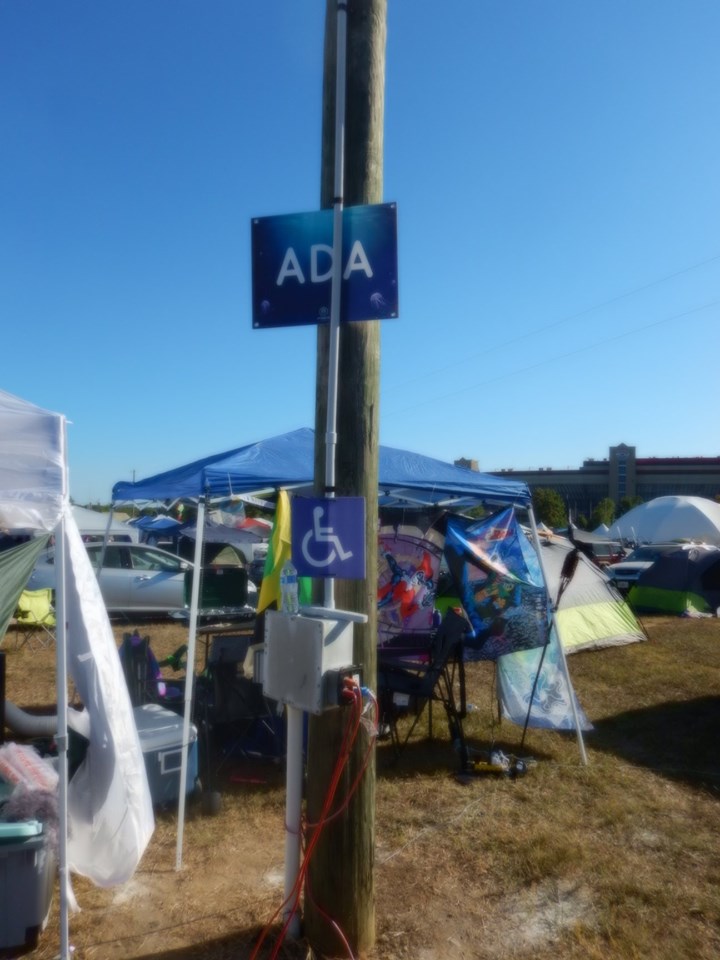 There are food vendors by the camp site and in the music festival so we didn’t want to bring too much food and drinks.  We only wanted to pack the main essentials.  There was also a general store booth by the camp area to buy items like food, clothing and other items that might have been forgotten.

There are several options of getting to Atlanta Motor Speedway from the city.  The speedway is about a 45 minute to 1 hour drive from downtown Atlanta depending on traffic.  There are day parking, camp parking, RV parking, taxis and rideshare options.  A shuttle bus does take people from downtown to the speedway for $14 each way but accessible shuttles needed to be requested at least 4 weeks in advance that was too late for us. 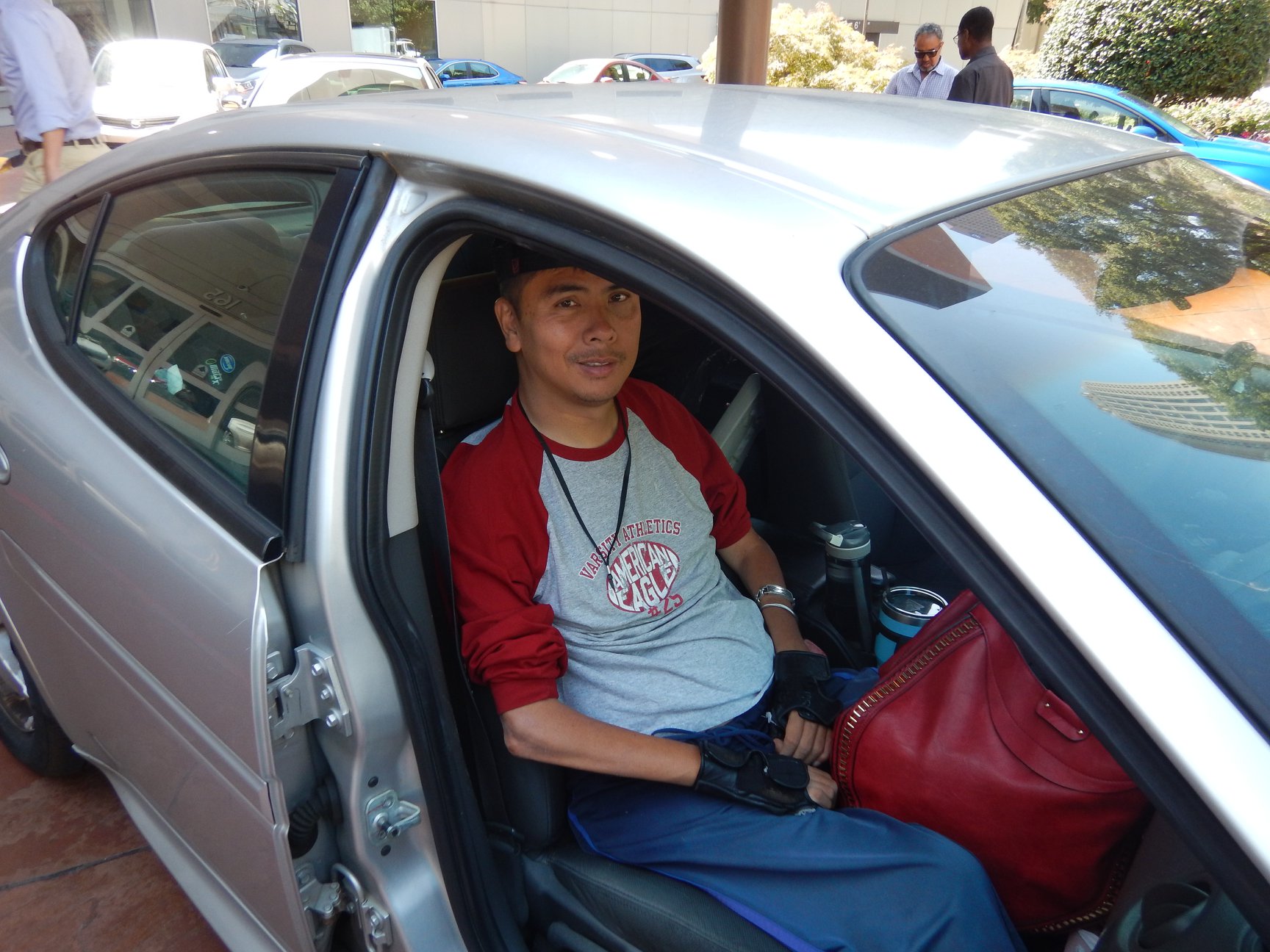 thanks for the drive to and from the festival!

Figuring that taxis and ubers will cost a lot to get us from downtown to the speedway, a friend said she would drive us to the camping area.  We had no idea where everything was and having a taxi drive us around looking for  the drop off would be time consuming.  So we crammed in all our belongings and made it to the speedway in 2 hours since we also stopped for lunch along the way. 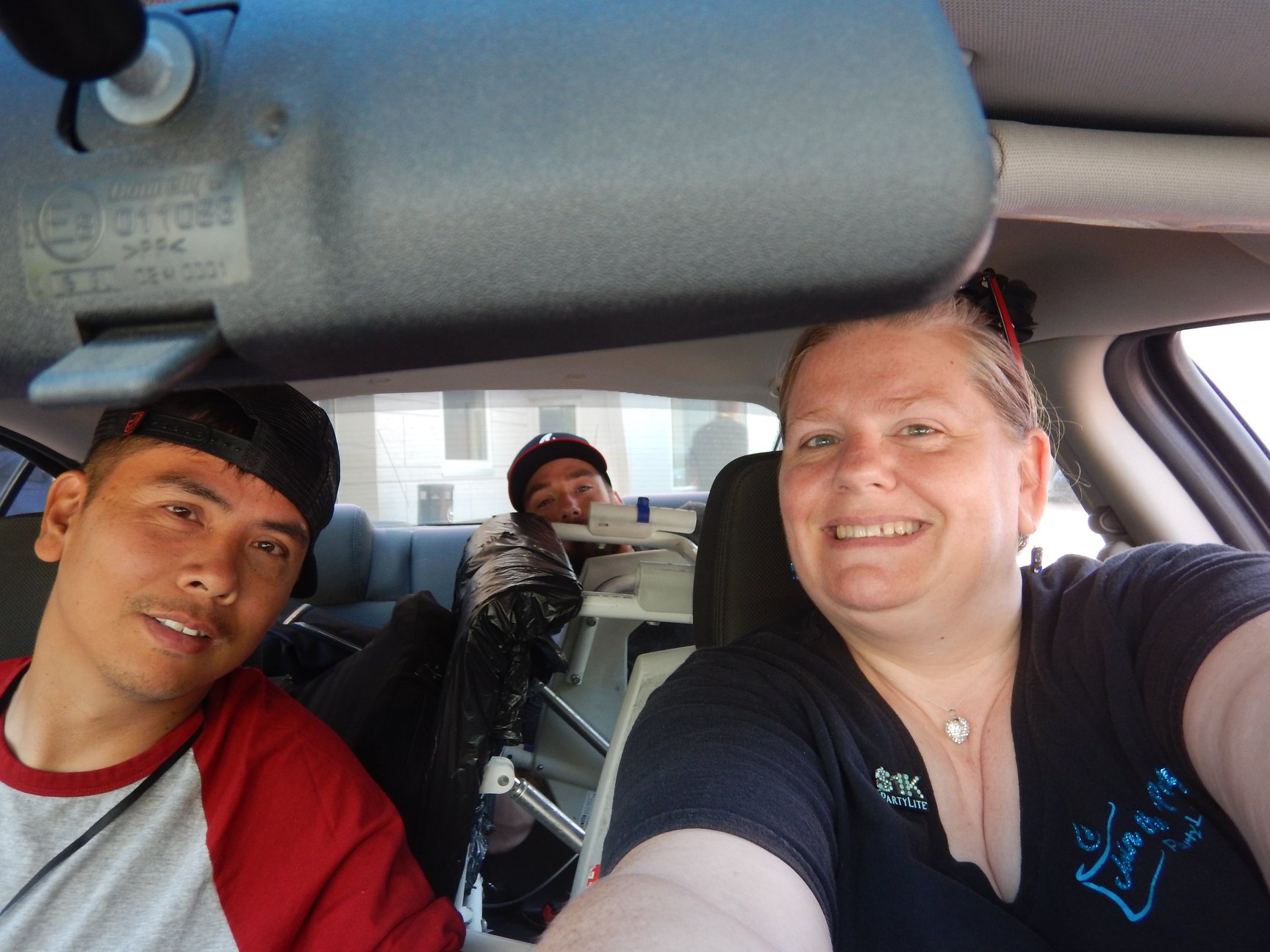 packed, crammed and ready for the drive to Atlanta Motor Speedway

When we got to the camping area, it was total chaos because staff members weren’t sure where wristbands were to be picked up and where the ADA accessible tents were.  After driving around the speedway twice, we finally found the ADA accessible camp area.  Our car and along with us were searched and we were greeted by Abby from Accessible Festivals and she helped us find our tent. 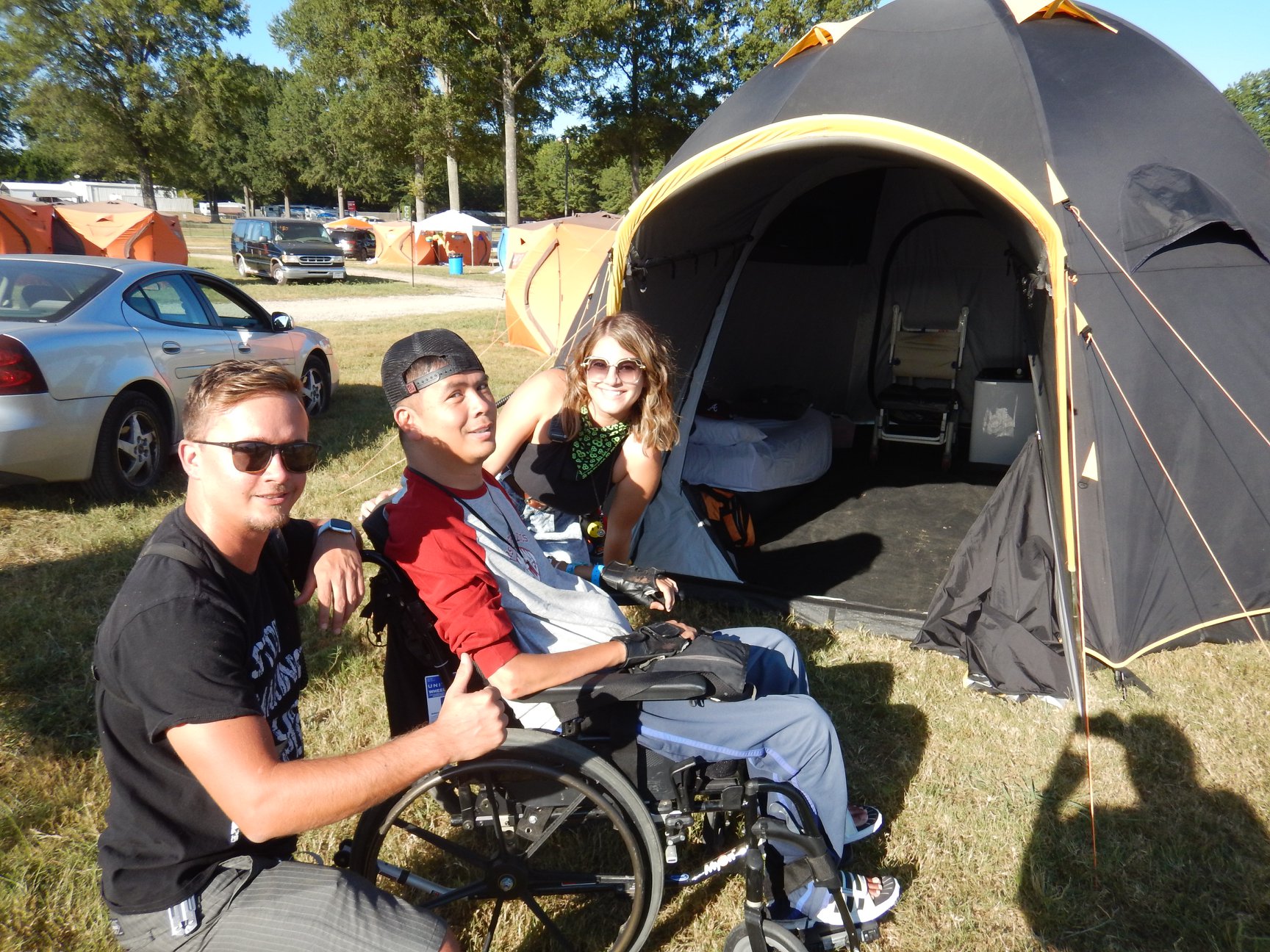 Our tent wasn’t located with the other ADA accessible reserved camping spot.  That designated spot was really close to the washrooms and showers.  Since our tent had a portable air conditioner, it was located a bit further away to accommodate the plugs and hose etc. 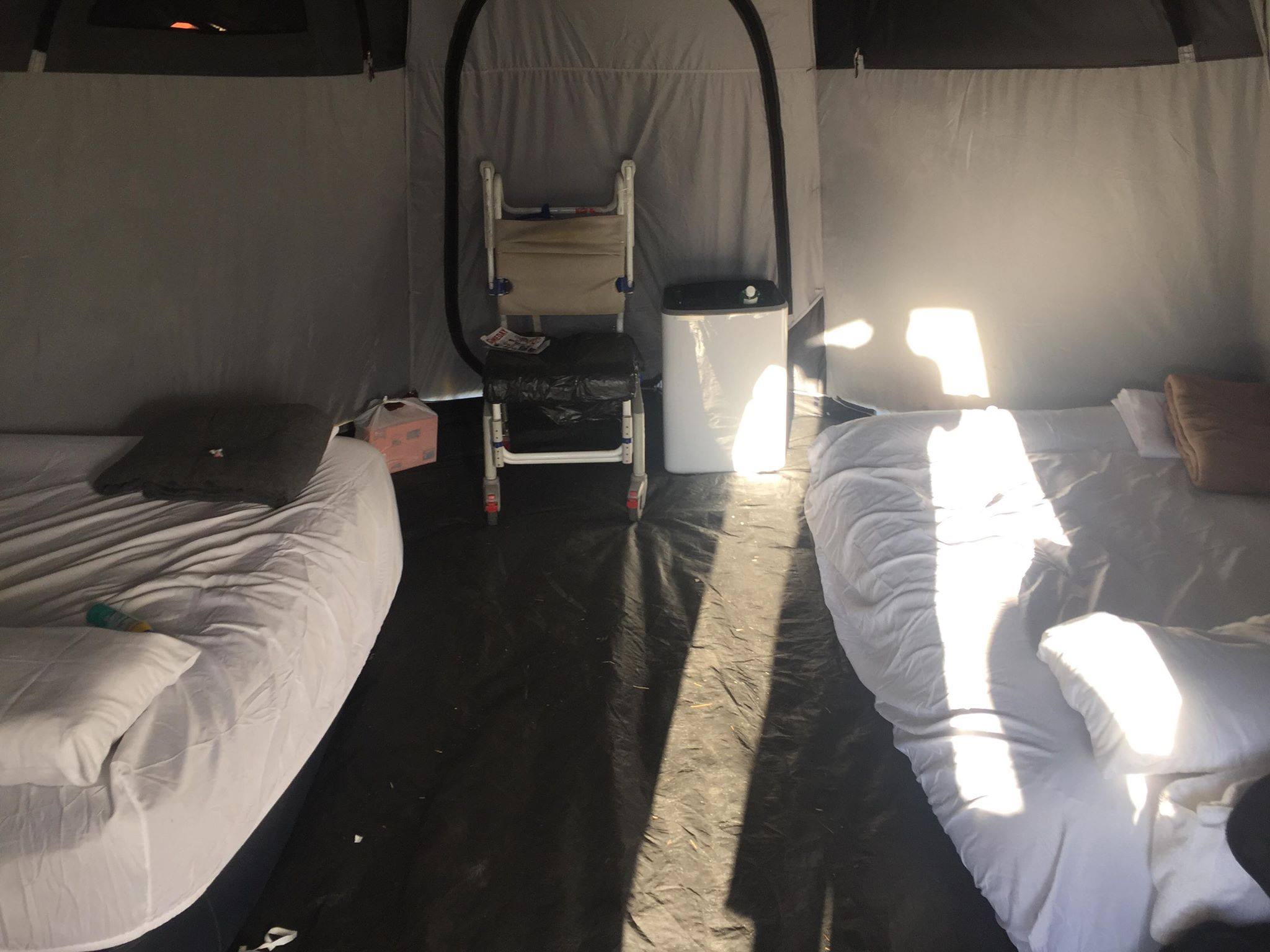 glamping! so spacious with 2 air mattresses and AC

Wow! was all I had to say.  The tent was huge and had 2 air mattresses with 2 pillows and blankets each.  There was enough room to wheel inside with my wheelchair and the tent was high enough, my tall buddy could walk inside fully straight up and have extra room above his head…. even with the lantern dangling in the middle.  The air mattresses were a bit low on the ground for transfers but I guess that was a given since we are camping.    We were so thankful for the AC because even with it on during the day, the temp inside the tent was still warm.  At night it was off because it was quite cold for us to sleep even though we bundled up for bed. 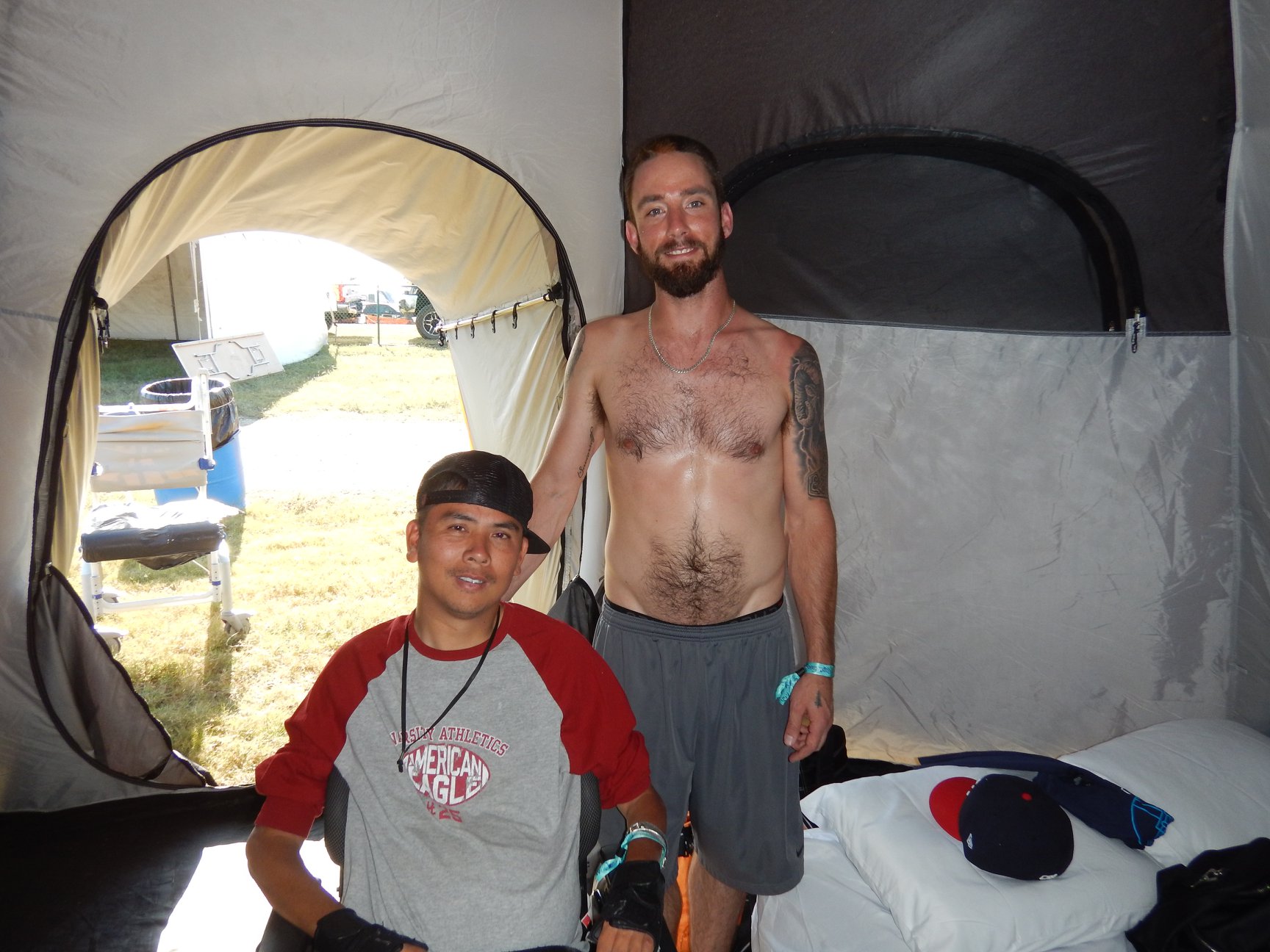 wide enough door for any wheelchair and high ceiling

We were located with other Qube tents that already came set up with beds and sheets.  This area did not seem as populated or as crowded as the General Admission camping sites.  This was good as there wasn’t as much foot traffic in this area.  That means we were in a quieter section of camping, even though we had close neighbors who had music blasting almost 24/7.  Our tent had a few Qube tents surrounding us and there was grass and a gravel road around us.  It was easy enough to wheel around in my wheelchair except it got pretty dusty when the maintenance golf carts roll by. 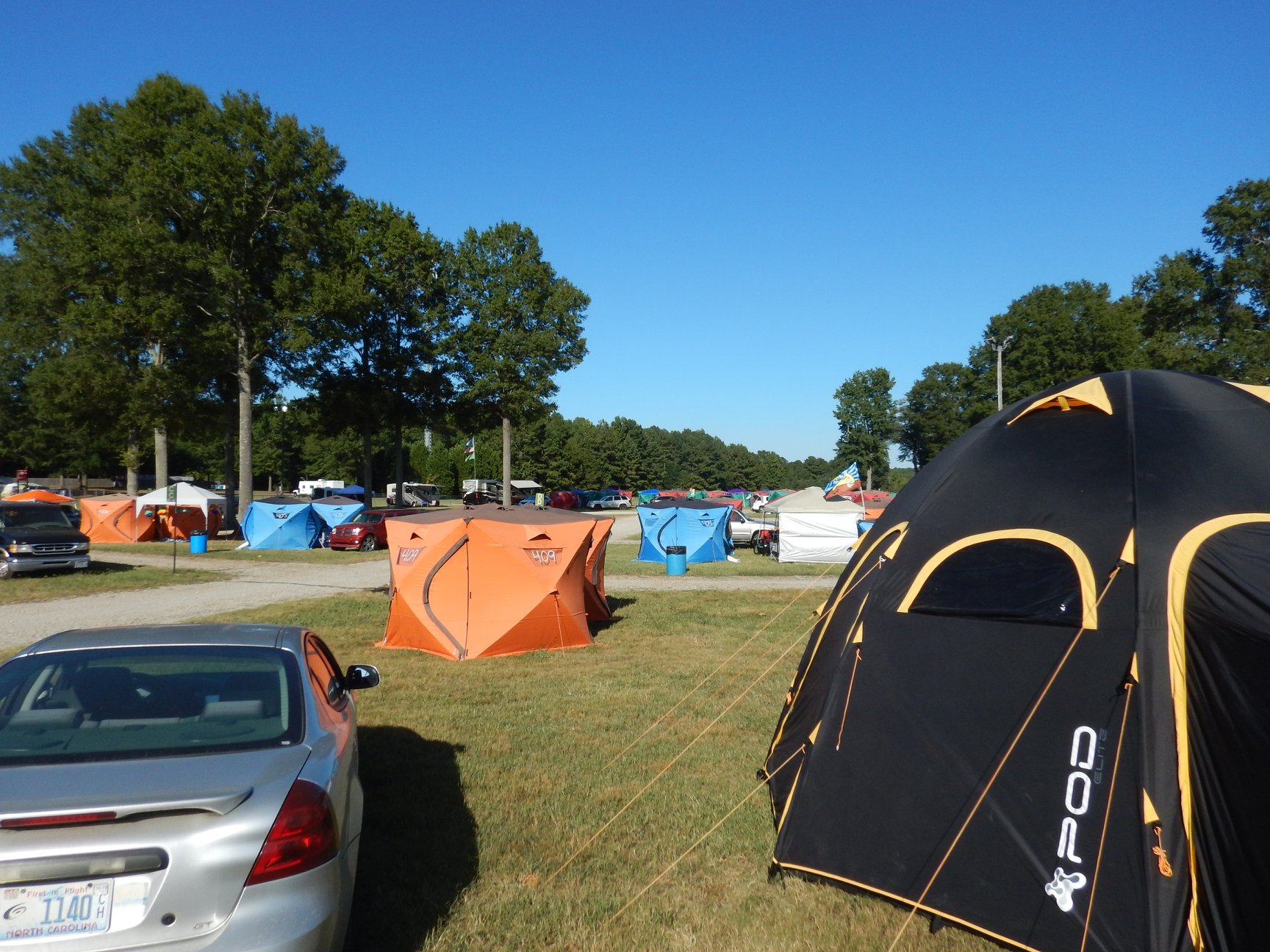 gravel and grass surrounds our tent 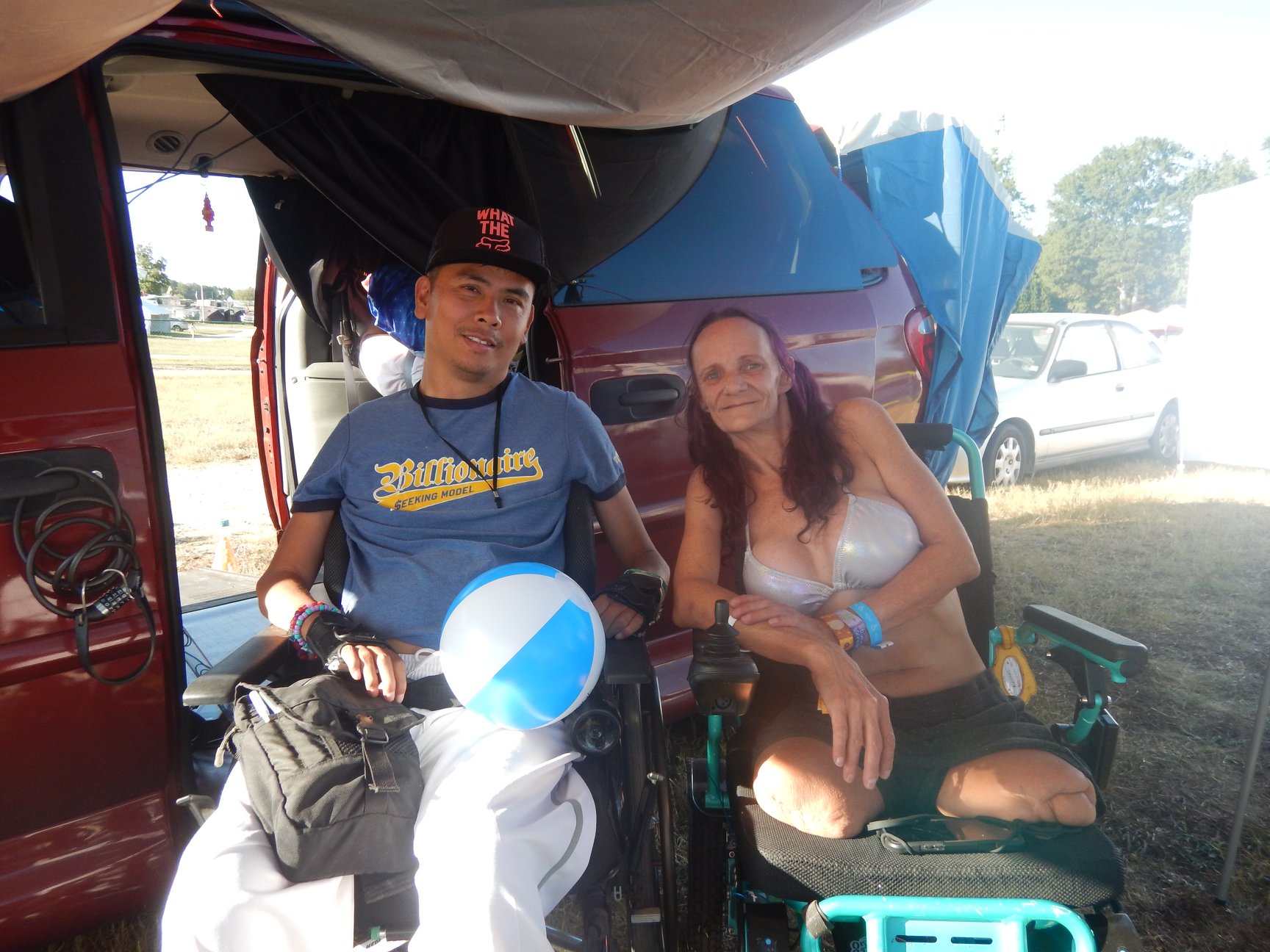 awesome to visit friends at different parts of the campgrounds

There are VIP bathroom and shower trailers really close to our tent which has AC and light music playing, but unfortunately there are a bunch of stairs to get in.  The main bathroom and shower building is only a couple minutes walk from our tent but my commode bathroom chair has small wheels that can’t roll easily on grass and gravel.

roll in shower at the regular men’s bathroom/shower building 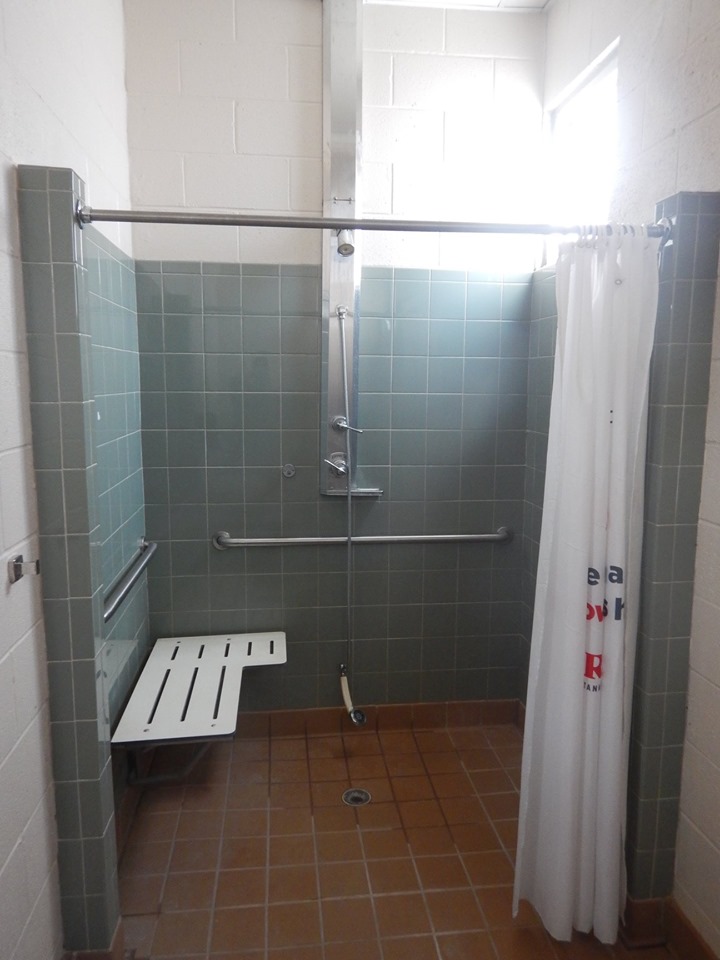 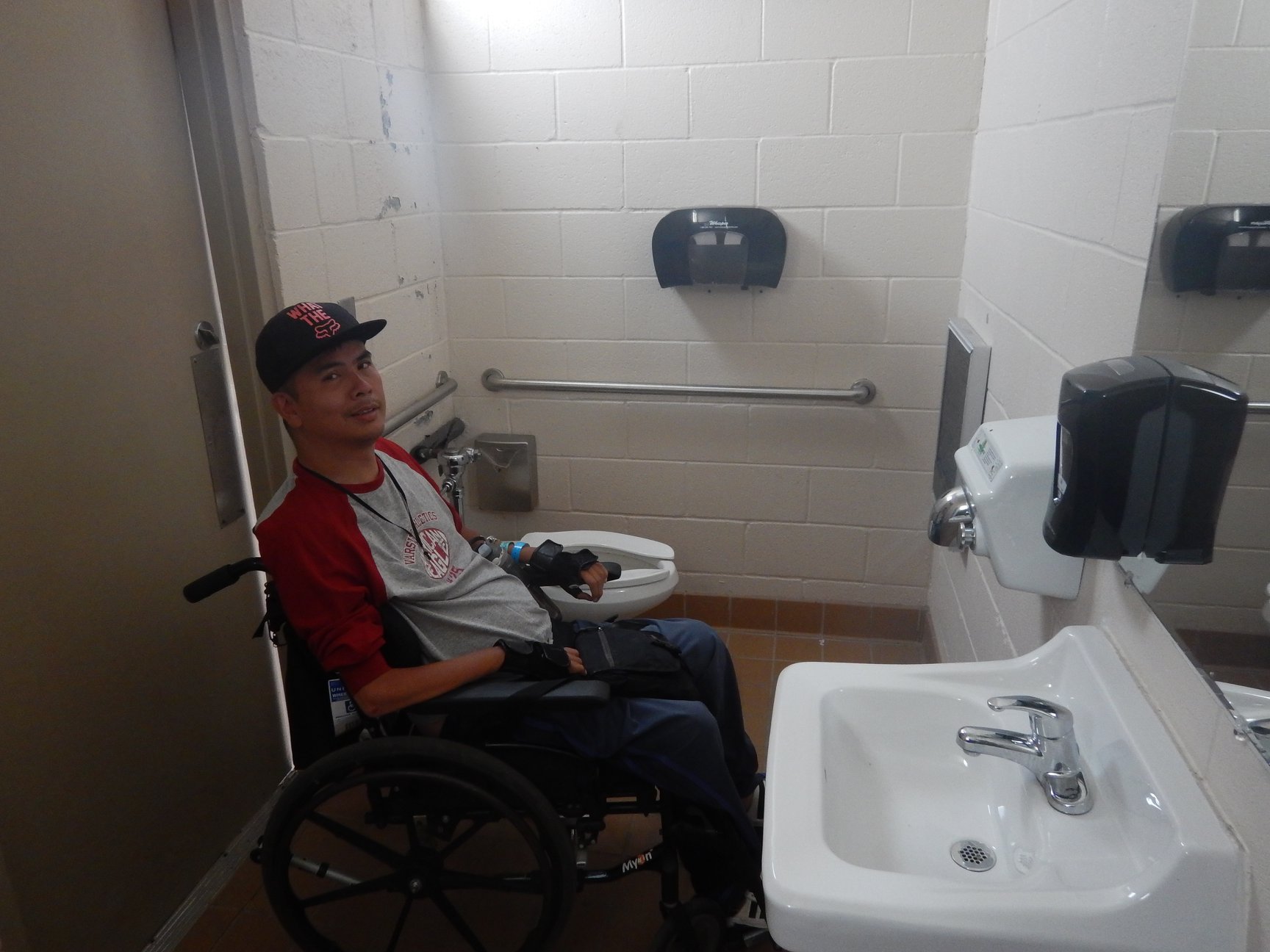 the toilet with grab bars at the same accessible bathroom 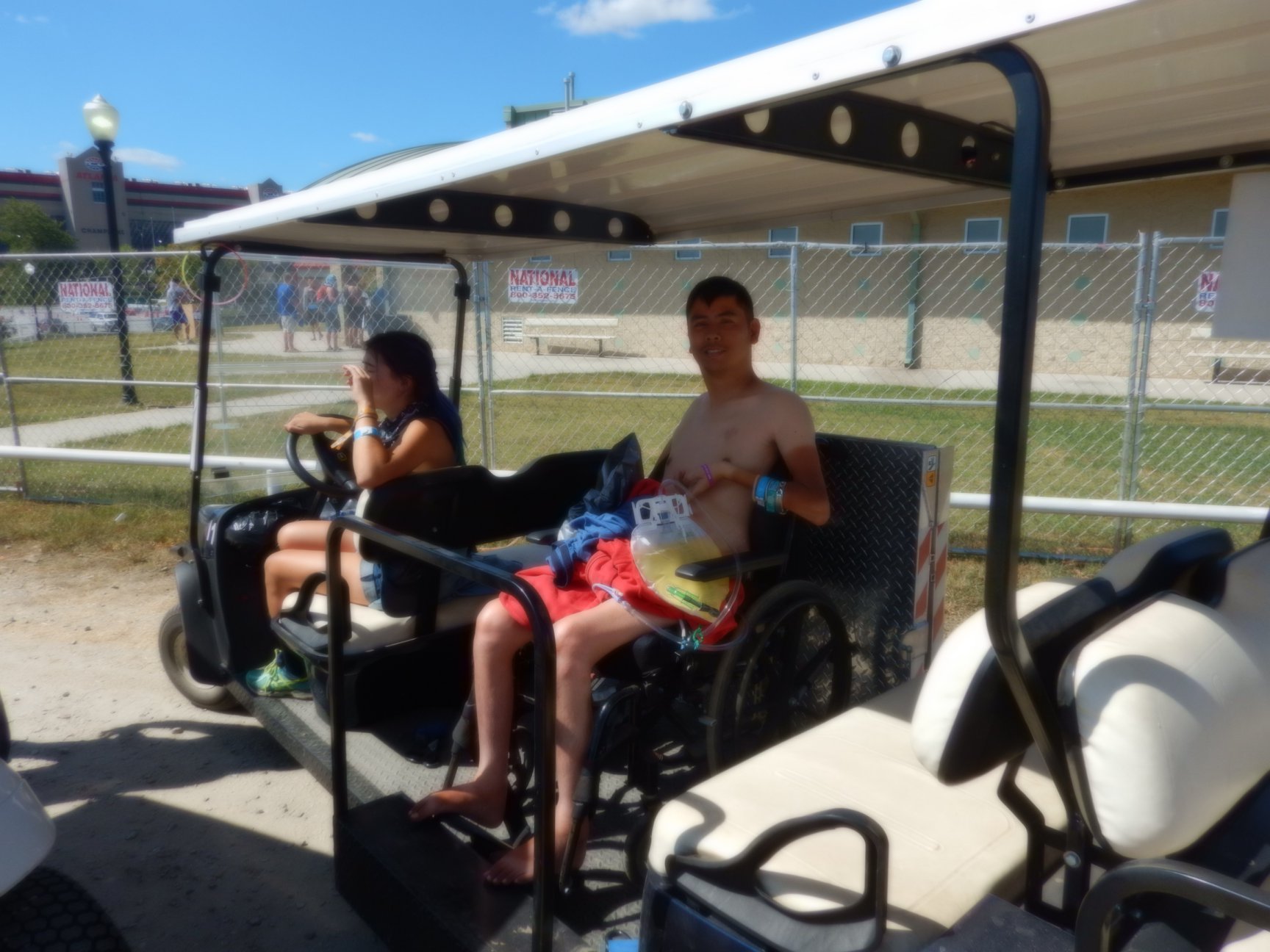 Shakedown street is located right beside the camping area and is a street full of food and shop vendors.  During times when Imagine Festival is closed, people can go here to eat, shop, hang out, and just spend some time here.  At the end of this street is where the Silent Disco is located.  Open from 1pm to 7am all 3 days, this area allows people to party and dance all night until sunrise.  People get to wear headphones and listen to 2 different channels of the 2 DJ’s on stage.  It was great to have the silent disco because campers right by the stage won’t be disturbed by music playing all night unless they wear the headphones. 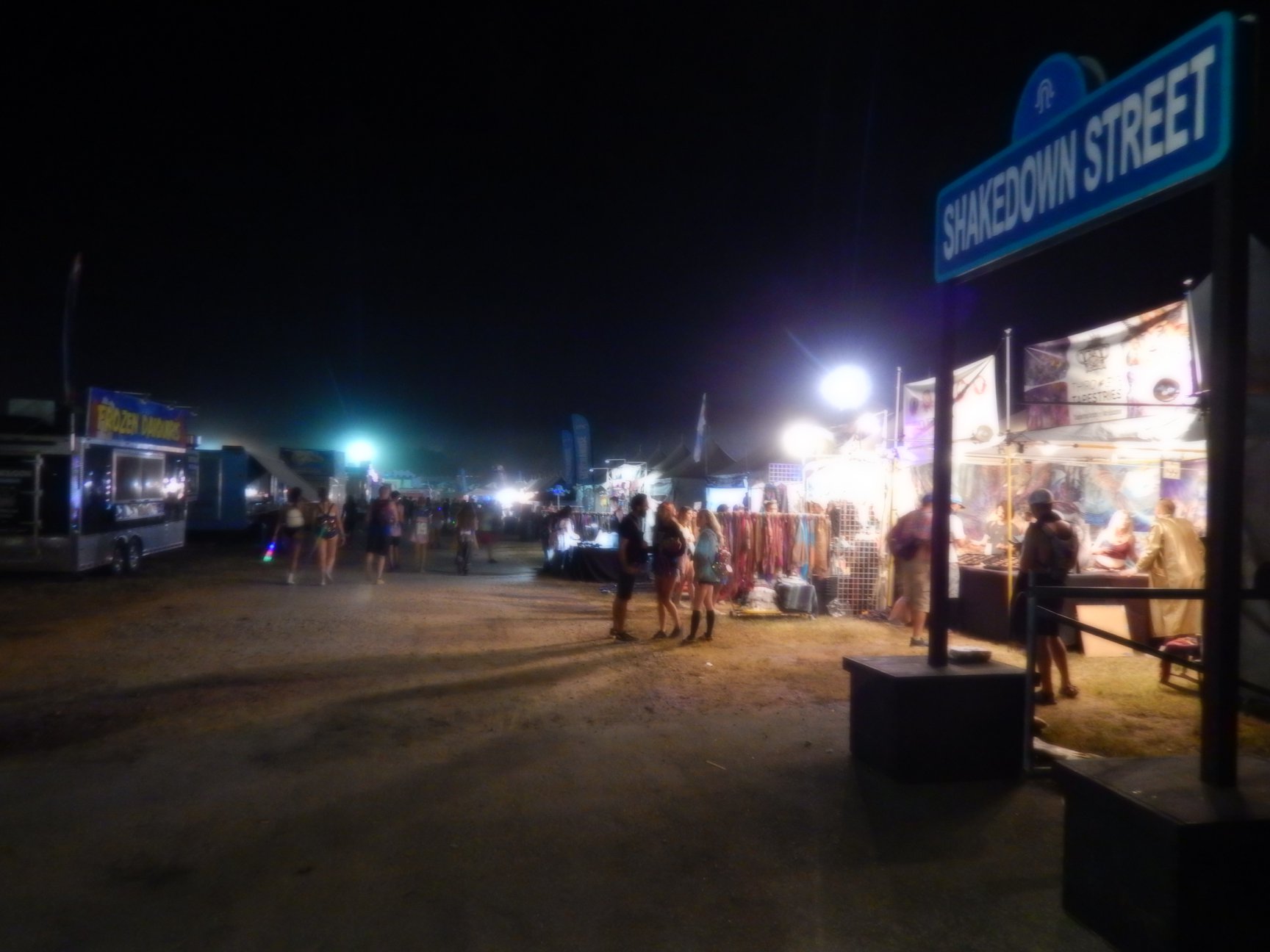 Wow! What an amazing first time camping ever and fantastic 3 day weekend at Imagine Festival.  One of my best weekends ever.  Just because you’re in a wheelchair or have any ADA accessible needs, camping at any music festival should not be a problem.  The tent, pathways, bathroom facilities all exceeded my expectations.  Every single staff member from Imagine Festival, Unity and Accessible Festivals that we have encountered has been exceptionally friendly, happy and willing to help.  Thanks again to everyone involved.  With proper planning and full support from such a great team, Imagine Festival and camping with Unity should not be missed.   Please reach out to them for all your music festival trip planning.  With rumors of this festival moving to Chatahoochie Hills next year, I would love to be back in 2020 to see how ADA accessible the camping experience and venue would be. 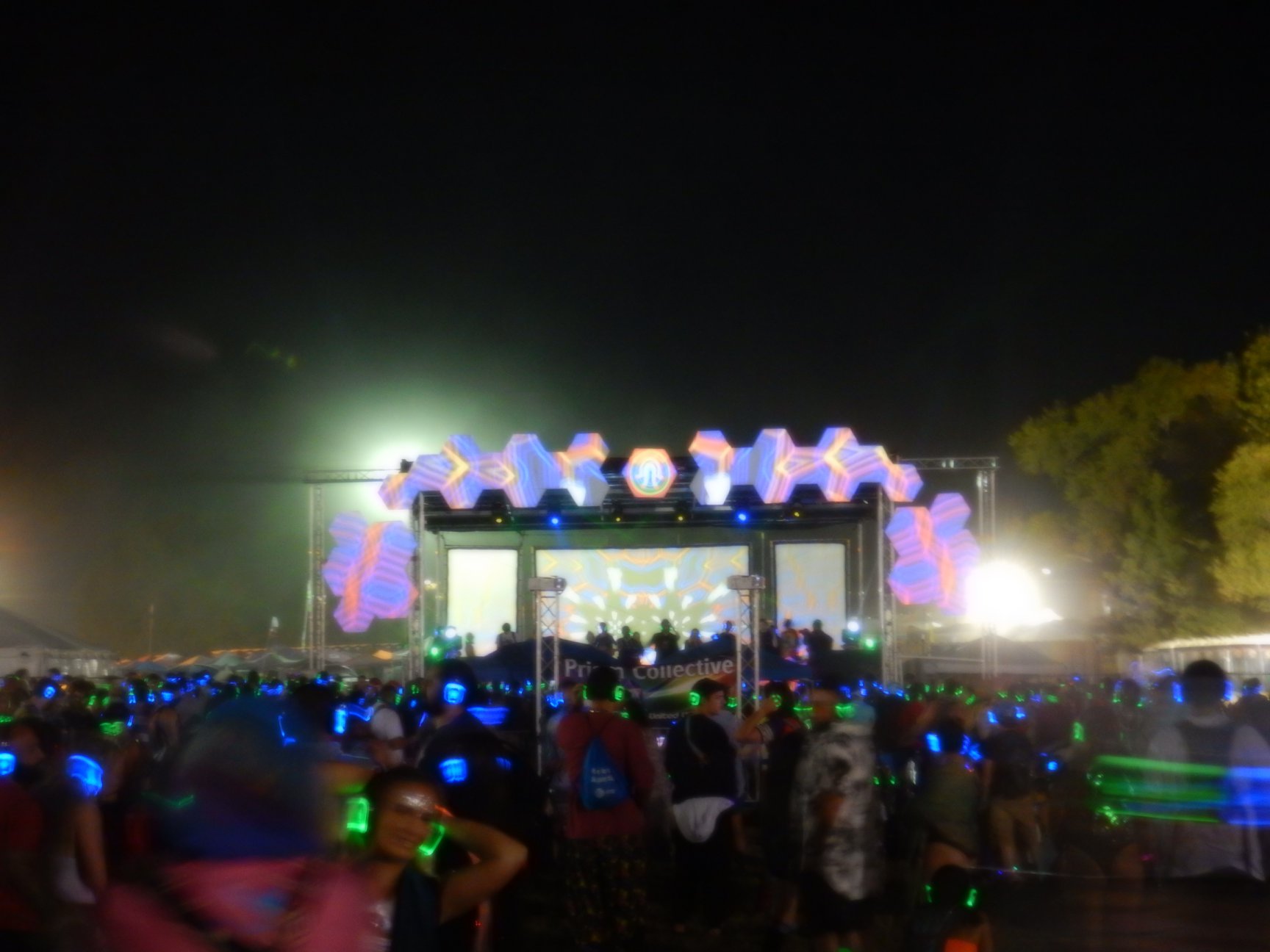 everyone with their headphones on at Silent Disco 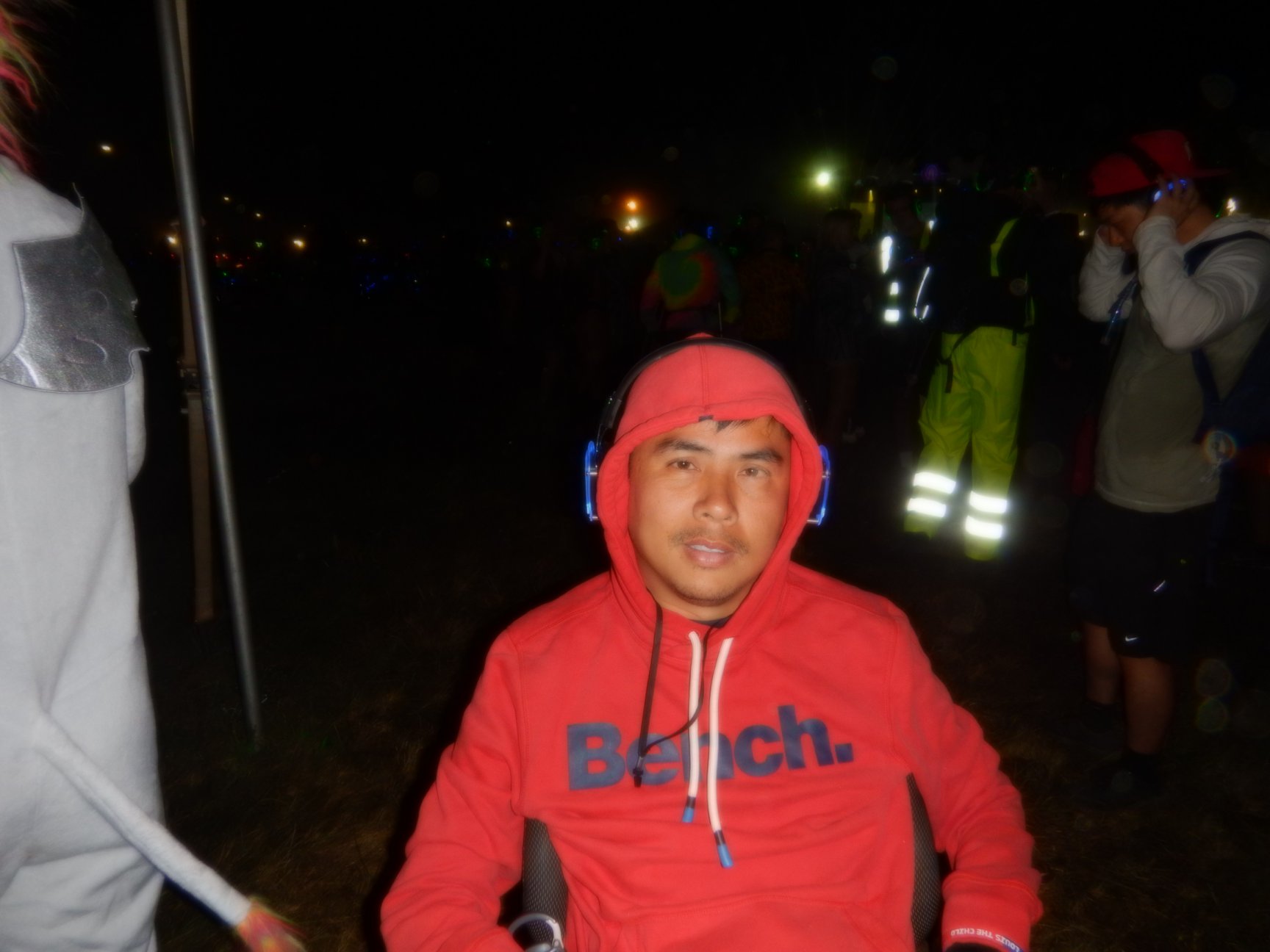