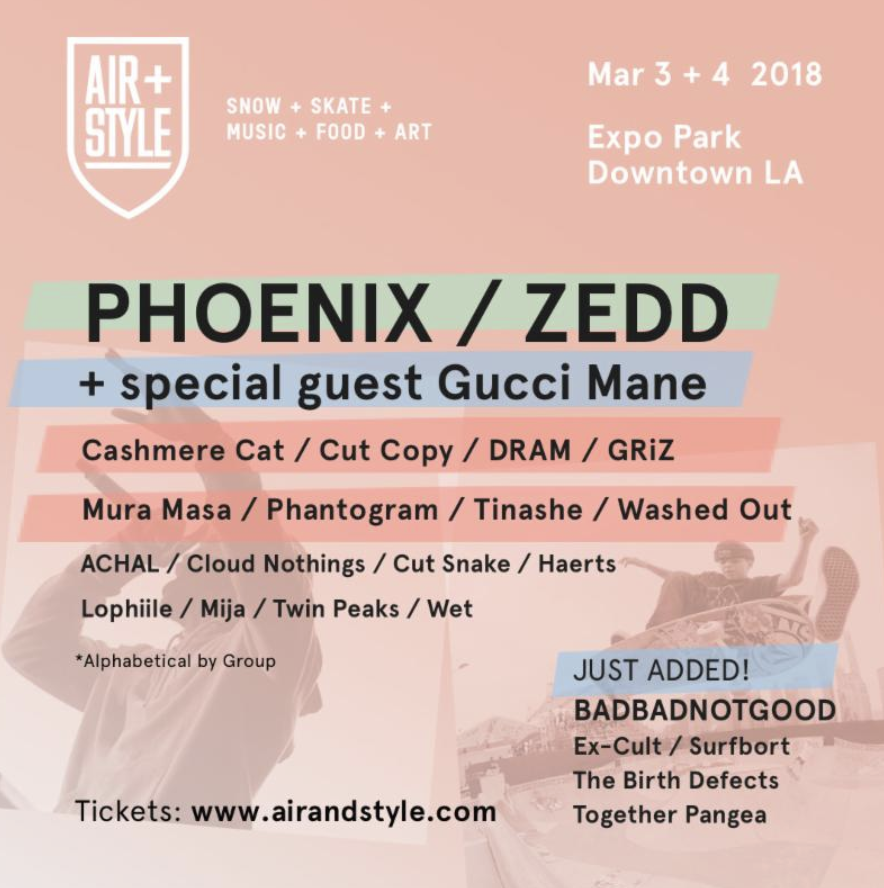 Dope music, tacos, boardsports, and the California sun. What else could you ask for?

Air + Style is not only a music festival, but it is a lifestyle festival. Featuring skateboarding, art, street-style, and snowboarding with an eclectic musical lineup that features electronic, indie-rock, chill-wave, dance-pop, and Gucci Mane.

Unless you’ve been living under a rock, you’ve probably heard of acts such as Phoenix, Zedd, Phantogram, DRAM, and Tinashe. Air + Style is packed with a diverse set of performers, here are the ones you’ll seriously regret missing out on:

These Chicago natives are bringing ’60s garage rock and the garage-punk sound of the 2010s back in a big way. Their fuzz-soaked psychedelia and punk ballads is the reminiscent lovechild of The Black Lips and The Stooges. Their live performances are full of charisma, fun-loving energy, and will have everyone crowd-surfing by the end of their set.

This Norwegian DJ, record producer, and musician is about to blow up. Better catch him soon before you’ll be camping all day to catch him more intimately. It’s only a matter of time before he headlines the likes of Coachella and EDC. He is already collaborating with artists such as Selena Gomez, The Weeknd, and Ariana Grande. His music is on the nexus of pop and electronic, it’s smoothness offers the perfect chill-wave ~vibez~ to complete your festival experience.

It’s no secret that the EDM realm is monopolized by men. This has to change. Especially because there are so many talented, original, and brilliant women putting out electronic music today, one of the best is Mija. This DJ started off at the ripe age of 19 after being discovered by dubstep king Skrillex. Since then, she has a fashion line under her belt, has collaborated with some of the biggest names in EDM, and is headlining festivals all over the world. She is also not afraid to transcend genres, as her remixes combine a mix of trap, pop, house, and even emo. Seeing her is always a new experience, and that’s why you have to check her out.

It’s always a nice reminder to remember that punk isn’t dead. Together PANGEA is one of the best on the scene today. These Los Angeleno’s have found the perfect formula to create an impeccable garage rock song. Their critically acclaimed and highly anticipated debut LP Badillac was released in 2014, and they have been putting out bangers ever since. Their noisy, boozy shows always deliver an impressive set of debauchery, moshing, and sing-alongs.

Chill downtempo guitar solos, atmospheric beats, and a saxophone. Referring to his music as “Future Funk” live shows by GRiZ bring together a mix of glitchy electronic tracks with booming dubstep bass, and elements of jazz, hip-hop and soul. This Michigan native brings electronic sounds with a full band, and it is always an incredible experience. GRiZ does not bring the dance party we need, but the dance party we deserve.
0
0
Festival Preview, Uncategorized

Everything You Need to Know About Traveling Abroad